Acupuncture is an amazing modality that can resolve or alleviate many chronic and idiopathic syndromes that affect our veterinary patients. It is only one of the branches of Traditional Chinese Medicine (TCM), but it is powerful. This is a case presentation that illustrates the power of acupuncture, without the addition of herbs or herbal formulas. While herbal support is also an extremely useful TCM tool, it is important to recognize that acupuncture makes a major positive impact on the comfort and quality of life for our patients as a sole treatment. I’ve chosen to highlight this aspect of TCM for veterinarians who are not yet comfortable or educated in herbal medicine and for cases when herbs are declined by the client or the patient. It’s easy to get discouraged when we don’t get to use ALL of the tools at our disposal. I hope this case will serve as a reminder that just one tool can make a world of difference. 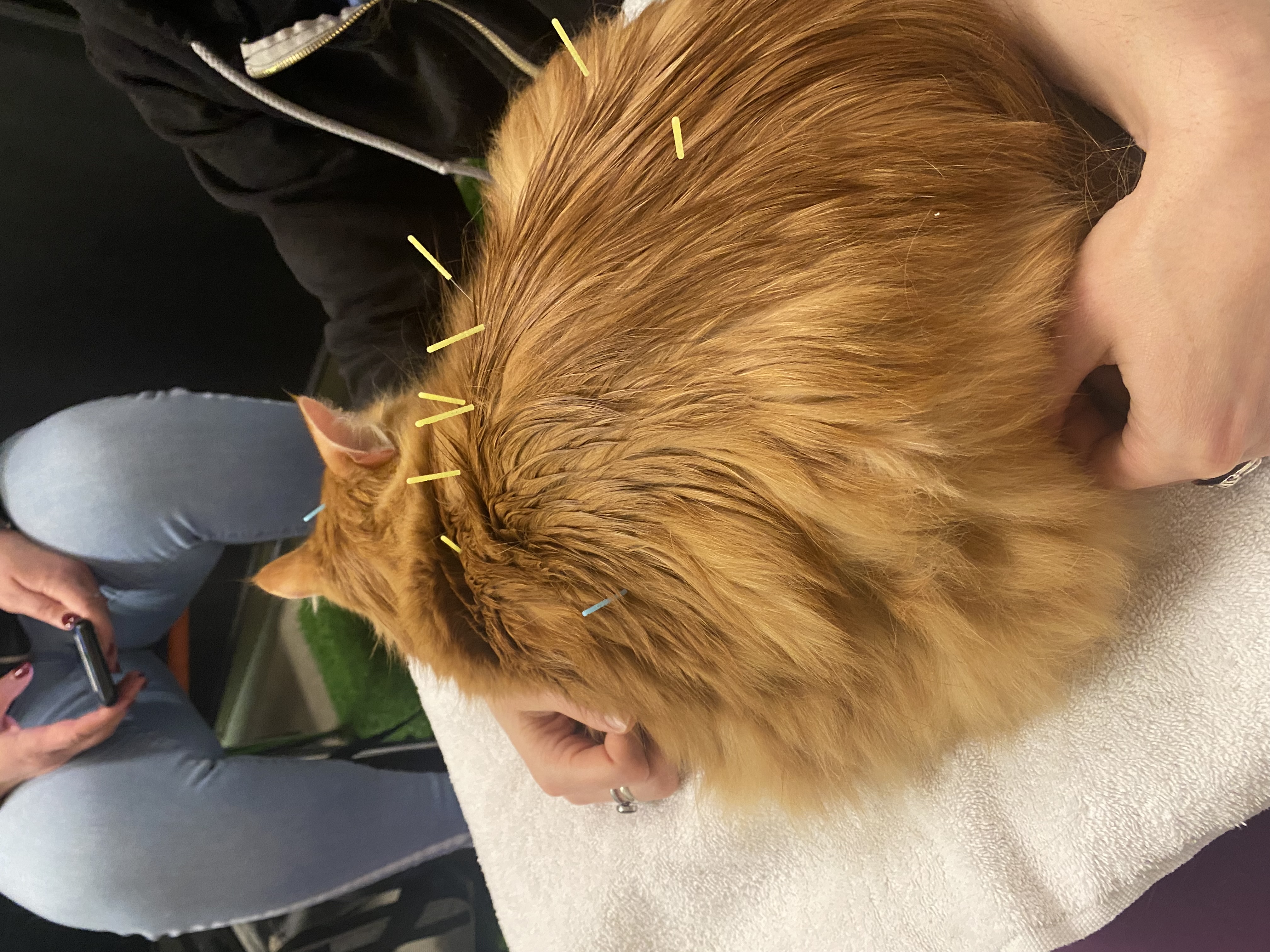 Harper is a 3 year old, mail neutered Siberian cat. Two months before his initial acupuncture consult with me, he presented to his primary care veterinarian for dysuria. His owner noticed he was going to the litter box more frequently and producing only small amounts of urine, despite straining.  A complete blood count (CBC), serum chemistry panel and urinalysis were completed at that time. The only abnormalities included moderate red blood cells in the urine sample and evidence of struvite crystalluria. He was hospitalized on IV fluids and supportive care. After a few days, he was sent home on a treatment plan that included canned prescription food (Hill’s Science Diet C/D), a short course of Onsior (an NSAID), gabapentin and prazosin.  The treatment plan resolved all of his symptoms with according to his owner, his urinary habits were normal within about 1 week. However, 3 weeks after discontinuing the medications, the symptoms recurred. He was placed on the same treatment plan and again, the symptoms resolved. However, his owner became concerned about future chronicity at that time and contacted me for an acupuncture consult.

When Harper came for his first acupuncture visit, he was still taking prazosin and gabapentin daily. HIs owner was worried that is she completely discontinued Western medications, his dysuria and discomfort would return. On his pre-visit paperwork, she shared, “I have three cats including his brother who is an alpha cat that he loves, but also stresses him out sometimes.”

At his initial visit, I asked more questions about Harper’s daily life and the “stressful” relationship with his brother. For the most part, he and his brother are good friends and they play normally. However, his brother is also unpredictable. He has the habit of pouncing on Harper from out of nowhere and exhibiting aggressive behaviors, without a trigger. Harper’s owner reports that he will either just “put up with it” or run away and hide, but that she can tell he is stressed. She also feels he has a low level of anxiety on a daily basis because he is worried that his brother could “pounce at any time, without warning.”

Harper loves to eat and he weighs approximately 8.5 kg. His body condition score is 7/9, so he is overweight. The rest of his physical exam is within normal limits. He is friendly and amenable to handling. At the beginning of the exam, I could tell he was a little nervous, but he relaxed with some gentle massage of GV 20 and An Shen. His tongue was pink and moist, with a mild lavender hue. His pulses were even and fairly normal, but they felt most forceful at the deep level and seemed choppy. He was sensitive at these Bladder channel points: BL 25, BL 28.

TCM diagnosis: Liver Qi Stagnation leading to Damp Heat in the Bladder. (The crystalluria would be diagnosed as Phlegm according to TCM, but as it was resolved, I did not include it in my current TCM diagnosis).

Repeat visits: Harper has been returning for acupuncture approximately once every 4 weeks for 5 months. His owner declined herbal formula options at this time. 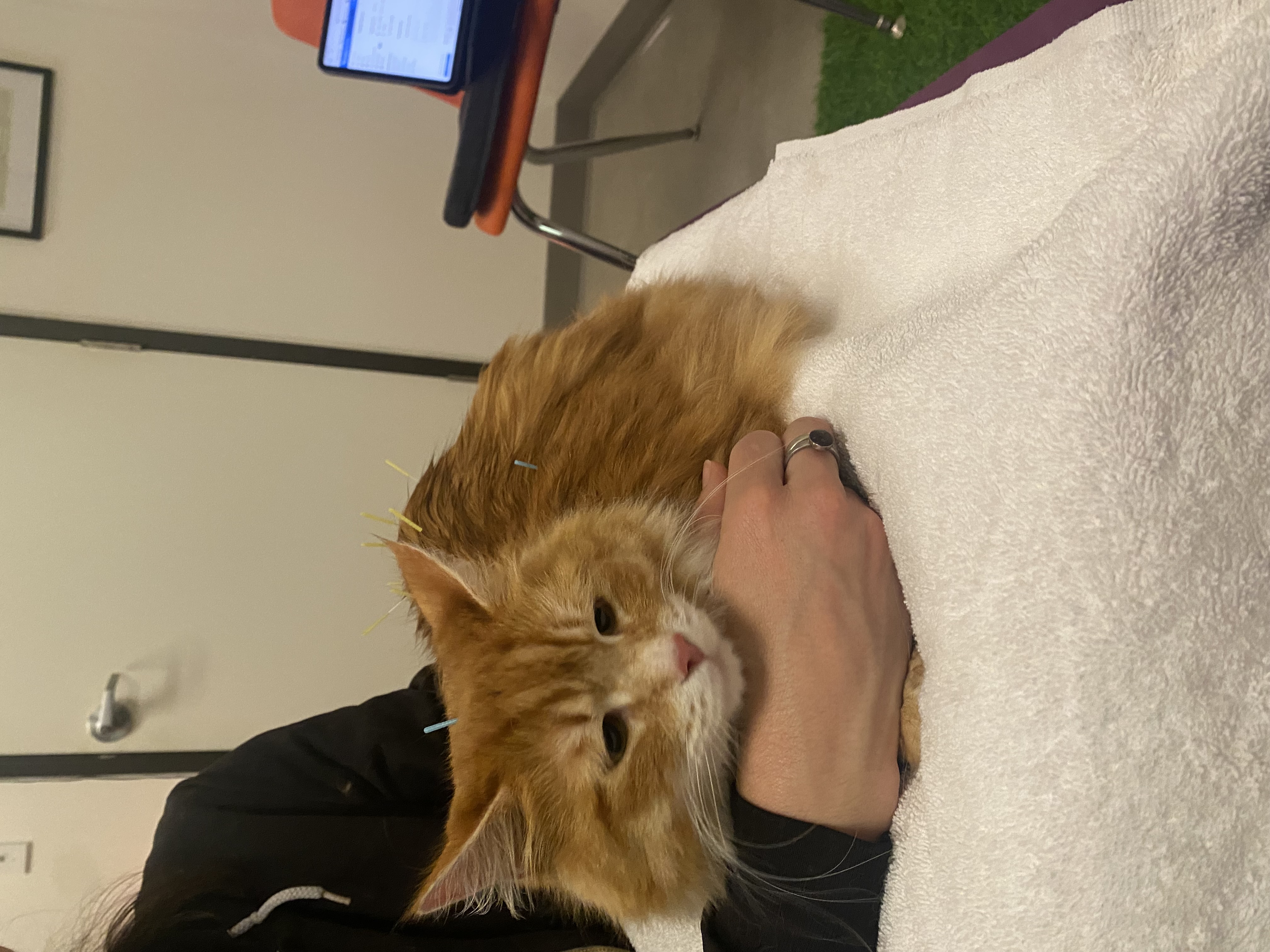 Results: Harper has been completely off of his Western medications for nearly 5 months. He has had no return of symptoms during this time.

Discussion: Acupuncture has been a successful tool in helping Harper return to normal daily life and comfort. I also coached his owner on some environmental modification so that Harper does not need to worry as much about his unpredictable brother. This basically consists of creating a safe space, where his brother is nota allowed, for Harper to rest and recharge. His owner is also considering bringing the brother for acupuncture and has installed Feliway diffusers which she believes is helping to reduce the brother’s aggressive behaviors. She is participating in more daily play time with both cats for enrichment. Lastly, I have demonstrated and coached his owner on how to perform gentle massage  and pressing point massage to help with anxiety and to stimulate the Bladder channel points related to the Kidney and Bladder.

I would have liked to prescribe 1-2 herbal formulas to assist in resolving the Liver Qi Stagnation and the Damp Heat, but his owner was not really interested in this additional tool.  Since we are getting results and Harper and his person are both happy, we will stick with the current plan.

His owner is also considering a transition off of the prescription food now that Harper has been stable for almost 6 months. This will be our next plan of action.