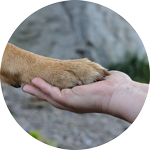 Donations to the World Association of Traditional Chinese Veterinary Medicine (WATCVM) ensure grant support for those individuals interested in researching aspects of traditional Chinese veterinary medicine (TCVM). In this way, individuals and organizations can promote TCVM research and help contribute to the accumulation of scientific evidence to support these treatments, reduce disease and enrich the lives of animals. The WATCVM is a non-profit organization and all donations are tax deductible. Donations to the WATCVM Research Fund may be made through Administrative Coordinator of the WATCVM. More information can be obtained at This email address is being protected from spambots. You need JavaScript enabled to view it..

2019
Lorena A.  LLoret, DVM
“Evaluation of the intraoperative and postoperative analgesic effect of electroacupuncture (EA) in dogs subjected to repair of the anterior cross ligament through the surgical technique of advance of tibial tuberosity (TTA)”
Funded: $5,000
2018
Marisa Slabber, DVM
"The effect of electro-acupuncture stimulation of Bai-hui, GV-14, and bilateral GB-21 on heart rate variability and horse behavorial indicators in horses"
Funded: $3,284.00